HOLY GLUTIUS MAXIMUS, ROBIN! HAND ME A FISH STICK, WILL YA? 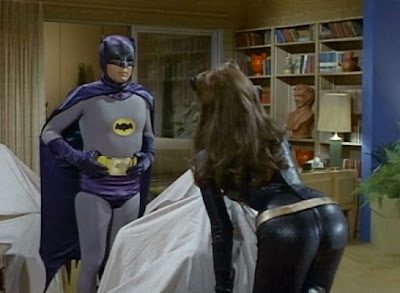 Sure, the comic book world is filled with buxom, overaccentuated vixens that are, at least in the real world, physically impossible to replicate, even when Pam Anderson goes under the knife for the 17th time this month, or whatever Kardashian sister is popular at the moment tries desperately to get the attention of anyone bored enough to watch. So it isn’t surprising then that the literary medium most predatory on the prurient interests of still pre-pubescent little boys should translate into one sexy mindfuck of an album when it finally hits the record shops. And even though you wouldn’t think the Fifth Avenue Buses Trip to Gotham City could get you hard for a second with a Banana Splits in the Bowery cover sleeve like that, trust me, when it’s time for these skintight super goddesses to purr like the sex-crazed Marvel kittens they really are, you’ll be wishing you had Julie Newmar tied up and lapping cream off of the turntable in your bedroom.

The little boys understand. And so Trip to Gotham City works best when it’s the girls who are singing, or slinking, or purring in the background, which they do really really well. And even though “Joker” might get your attention with its masculine distorted wah wah guitar licks, it’s still the go-go girls who steal the show, scatting nonsense vocals over the jazzy shuffle beat like a bunch of horned up schoolgirls trying to get you out of the BatCave. Fuck Cesar Romero, “Joker”’s really about what you’d do to Harley Quinn if she ever passed out on your dorm room floor.

Likewise, when the girls purr “Go to sleep, go to sleep” over the big beat sounds of “Sandman,” you’re much more likely to think of them succumbing to chloroform than backing up some overgrown supervillain on yet another dumb crime spree. But the sexiest superhero of ‘em all, and the one that naturally gets the biggest bulge out of your corduroys here, is the AMAZING slinky sex and sax-fueled track devoted to “Catwoman,” the all-time number one greatest DC spank bank heroine bar none. Sporting a sensational Danger: Diabolik style melody with great mysterioso surf guitar licks, this is every bit as playfully sexy as Selina Kyle in her skintight black leather catsuit, catching a claw on skin every once in a while with those lethal fuzz guitar breaks. The go-go girls are practically inspired here, knowing that this time its their turn to shine, purring and mewling “Meow!” over and over again while turning around and lifting their tails high in the air. Go ahead and sniff, little boy. Because whether it’s cats or shapely go-go girls or that elusive download that lets you see Lara Croft's gravity-defying jumps and tits, we’re all just suckers for a little superhero ass. 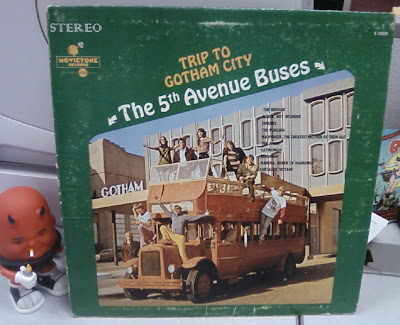 THE SQUID POP METER SEZ: Nine Out of Ten
BEST TAKEN WITH: Rum and Coke, Vaseline and a Poster of Lynda Carter

Boomp3.com
Posted by The Untamed Squid at 6:57 PM

The Untamed Squid
Philadelphia, PA, United States
I HAVE A DOCTORATE DEGREE IN MASS POP CULTURE, FILM STUDIES AND MUSICAL THEORY, AND HAVE WRITTEN MANY THESES ON THE COMPLEX INTERCONNECTIONS OF POPULAR CINEMA, MUSICAL TRENDS AND THE UBIQUITOUSLY TRANSIENT NATURE OF SOCIETAL NORMS. OH, AND I THINK THE OLSEN TWINS ARE REALLY HOT.

TED DANSON ON THE CEILING